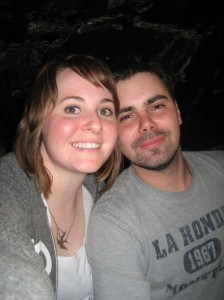 It all started with a chance meeting on another continent…

We met at a tiny hostel in April 2009 in Edinburgh, Scotland. At the time, we were both working and living in the London area and serendipitously met while on holiday in Scotland. Sue had a week left before she flew back home to the States, so we decided to spend that time together in London. During that time, we enjoyed each other’s company “just as friends” going to pubs, visiting museums and going to the theatre. When we parted ways we both felt that we had made a great connection and hoped to stay in touch and to see each other again one day.

Over the next eleven months, through skype, aim, email and snail mail a lovely friendship turned into a budding romance. In March 2010, Nico came to visit Sue for the first time in Los Angeles for three months. It was during that time that we fell in love. After that, our relationship continued long distance; three months of being separated, followed by three months of being together and so on (Nico coming back to LA two more times and Sue going to Canada & Argentina). Until January 2011, when Nico popped the question and then we were engaged!

We’ve now been engaged for many months, and have spent the time working on getting Nico his visa paperwork to come to the U.S. to get married and to become a Permanent Resident (it has taken such a long time!). Our long-awaited wedding will be January 14, 2012. Finally then, we’ll be husband and wife!